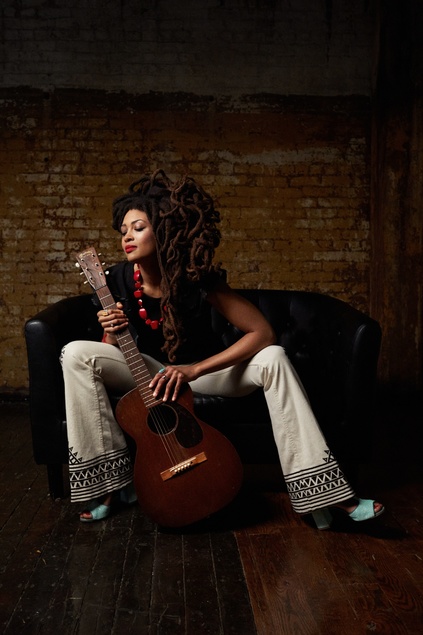 We are delighted to welcome the wonderful VALERIE JUNE under the hammers!

Valerie June will return to Ireland in July as part of her European tour. Her July tour will also take in France, Germany & The Netherlands. This will be her Third EU Tour since the start of the 2017, With all shows across the continent selling out.

June’s new LP ‘The order of Time’ is already being heralded as one of the best albums of 2017. The Guardian’s 4-STAR review affirmed, “The album finds June full of childlike wonderment amid a gloriously ethereal atmosphere reminiscent of Van Morrison’s ‘Astral Weeks.’ UNCUT declared that she was a “A true star in the making.” Whilst the New York Times tell’s us “June’s musical imagination is a world to get lost in.” When Bob Dylan was asked in a rare interview with The Guardian earlier this year, what he was listening to – His answer was also ‘Valerie June’

June knows a thing or two about turning hopes and dreams into realities. With her debut Pushin’ Against A Stone, she went from self-releasing her music as Tennessee’s best kept secret to being hailed by the New York Times as one of America’s “most intriguing, fully formed new talents.” The New Yorker was captivated by her “unique, stunning voice,” while Rolling Stone dubbed her “unstoppable,”. She astonished TV audiences from coast-to-coast with spellbinding performances on The Tonight Show, The Late Show, Austin City Limits, and graced some of the world’s most prestigious stages, from Carnegie Hall to the Kennedy Center.

First Lady Michelle Obama invited June to The White House, and she toured with artists like Sharon Jones & The Dap Kings, Sturgill Simpson, Norah Jones, and Jake Bugg in addition to flooring festival crowds at Bonnaroo, Outside Lands, Newport Folk, Hangout, ACL, Pickathon, Mountain Jam and more. In the UK, the reaction was similarly ecstatic. June performed on Later…with Jools Holland, joined a bill with the Rolling Stones in Hyde Park, and took the press by storm. MOJO swooned for her “glorious sound,” and The Independent’s Andy Gill wrote, “June has the most strikingly individual delivery I’ve heard in ages.”

Valerie June returns to West Cork on July 14th for an special intimate performance at Connollys of Leap … don’t miss out!