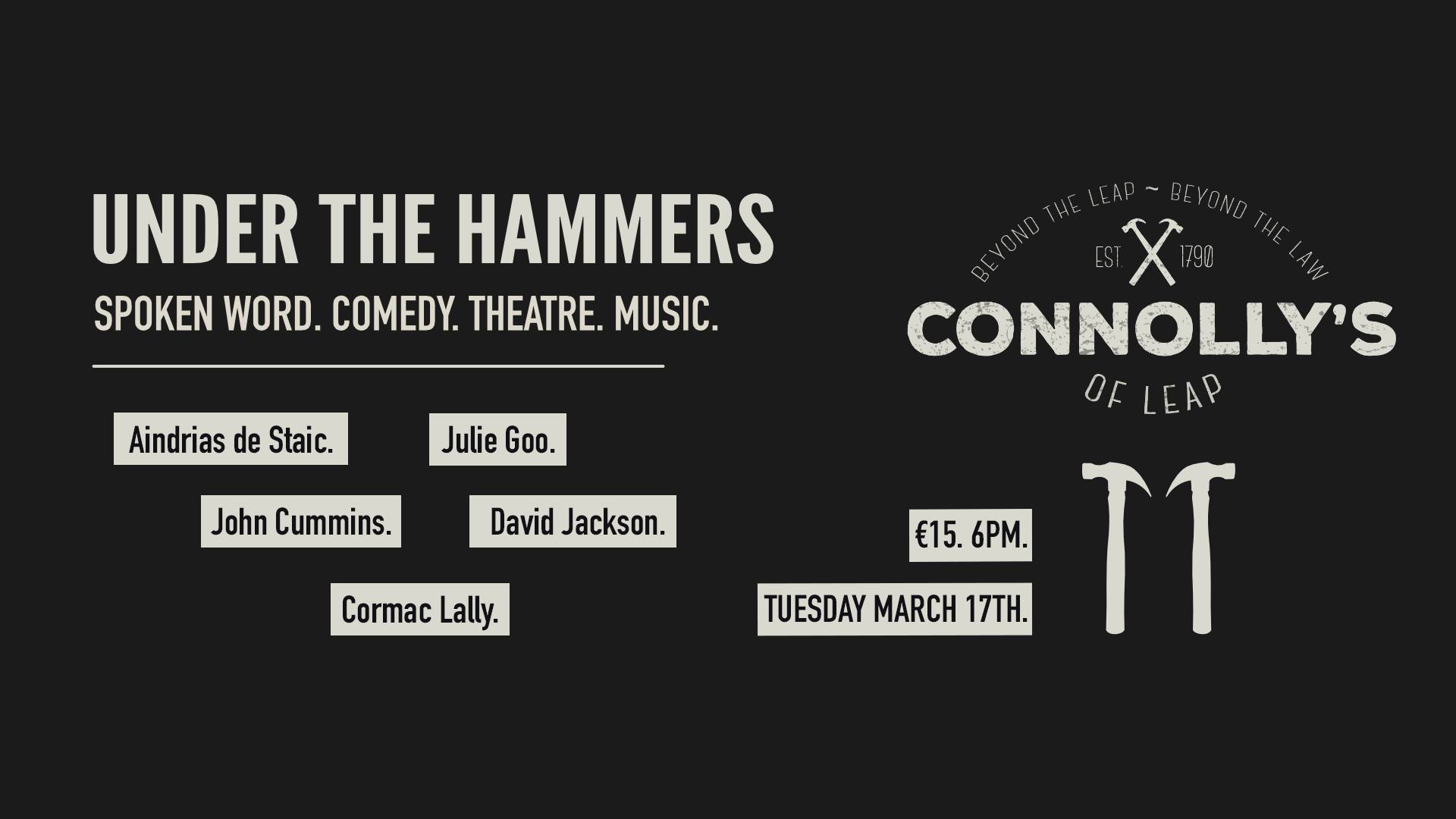 Connollys of Leap presents… Under the Hammers

After a long break, Under the Hammers is back with another night of poetry, spoken word and song, brought to you by a very special collection of individuals.

What Is Embodimensional?
The Embodiment of more dimensions of awareness
Raising vibrational frequency of consciousness through sound
“I use Poems to attune you to the Tones, similar to Ogham chiseled in stone”
Who Is Embodimensional?
Embodimensional was founded by an Irish born poet, David Jackson.
His work collaborates with souls from all walks of life who share the vision of an expanded existence.

A rare opportunity to catch the eclectic elusive Seanachai, Aindrias de Staic, as he fuses traditional storytelling with his own contemporary tales.
A collection of stories, music, myth and magic with a blast of Wild Atlantic Wit. Hear tall tales and short stories of a hidden Ireland and of course, the latest & greatest misadventures of our favorite Bard.

Finalist Irish Comedian of the Year 2016.

Malcolm Hardee Nominee Alternative Comedy Award Edinburgh 2008.
“The performance is half seanchaí, half shaman, half Fiddler of Dooney with a whallop of Flann O’Brien thrown into the mix.”
– Philip Dune, State.ie

Julie Goo- is a Cork-born bilingual writer and singer. Goo has performed at a wide range of festivals and events including: TedX Cork, Winter Warmer, Lesbian Lives Conference, Circus Factory, Ó Bhéal, Electric Picnic, Valentia Isle Festival, Indiependence, Body & Soul, Live Words, Support Act to Panti Bliss at St. Luke’s, Connolly’s of Leap, The Quarter Block Party, Eastrogen Rising, The Kino, and Cork Midsummer Festival. Goo was crowned Munster Slam Champion in 2012, and has represented Munster in The All Ireland Slam twice.
GooLally Productions was created in the summer of 2017 when Julie Goo combined her work with fellow wordsmyth Cormac Lally, and their show ‘Me, Myself, and Ireland’ was born.
Goo’s poem Laundry was shaped into a poetry film in 2016 by Aisling Keating, and has been screened at O Bheal, The Friary and Dali & Gala.
Her slam poetry is socially conscious, politically driven, uplifting and open hearted.
You can follow Goo on her You Tube Channel, Facebook, or email juliegoopoetry@gmail.com