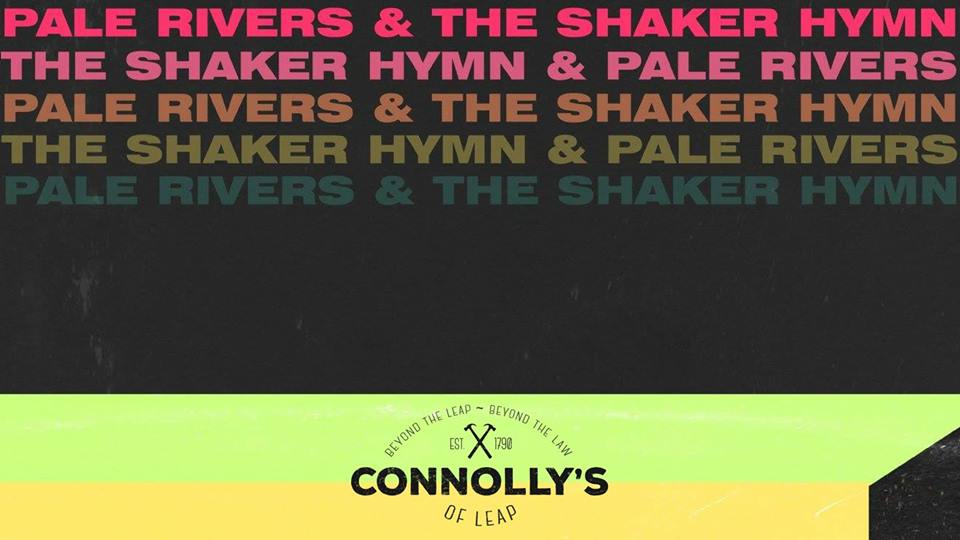 The Shaker Hymn and Pale Rivers take to the road together this April/May for a 5 date Irish Tour.

Pale Rivers are a five piece alternative, rock/pop band based out of Cork and Tipperary, Ireland. They have spent the last year writing and recording with producer Gavin Glass, and mixer Kieran Lynch(U2, R.E.M, Elvis Costello) working on music that would become their debut releases.

Following the release of their debut single, they began playing their first shows around the country including a slots at Hard Working Class Heroes, Whelans One’s To Watch Festival and Electric Picnic, as well as some high profile supports for acts such as Teleman and The Wedding Present.

2018 will see the release of their debut EP.
State Magazine IE – Faces Of 2017 – “County Cork continues to produce artists of rare quality and vision”
Nialler9 – “a song that grows from gentle waves of instrumentation to chugging guitar, from a whisper to a shout”
The Thin Air – “with its subtle synth textures, harmonic flourishes and burrowing chorus refrain, this is cunningly anthemic alt-pop at its finest”

The Shaker Hymn are a indie-rock quintet from Cork. Having known each other since childhood, the group started making rudimentary teenage noises back in the midst of 2005.

The catalyst for what would become The Shaker Hymn was a two-month American excursion early in 2012. A remarkable road trip ensued, involving acoustic support slots to Chelsea Crowell, everywhere between New York and Austin, Texas. It was on this trek that brand new, future-embracing songs were crafted; songs that would shortly enter the repertoire of the fledgling Shaker Hymn on the debut album Rascal’s Antique.

“…it’s hard to believe that this is a debut; there’s a huge amount of depth and maturity in the songs. Here’s an album to listen to again and again, and discover something new as you become acquainted.”— Dan Hegarty, 2FM

The band don’t fit easily into preconceived ideas of genre. Elements of indie pervade and some tracks tilt towards more alternative themes, but the overriding feel of the album 2016’s Do You Think You’re Clever?, is that of pop sensibility. Take Trophy Child or Sucking It Out, the deft hooks make the listener at once appreciate a serious band is at work.

There is a sense of glamour to proceedings, fans of Supergrass will be enticed by the nonchalant way that Sherlock spits out the lyrics. But while The Shaker Hymn evoke some of the best characteristics of 90s guitar bands, this is an intently forward looking outfit whose lyrics reflect the deep romanticism of classic artists from the country they call home.