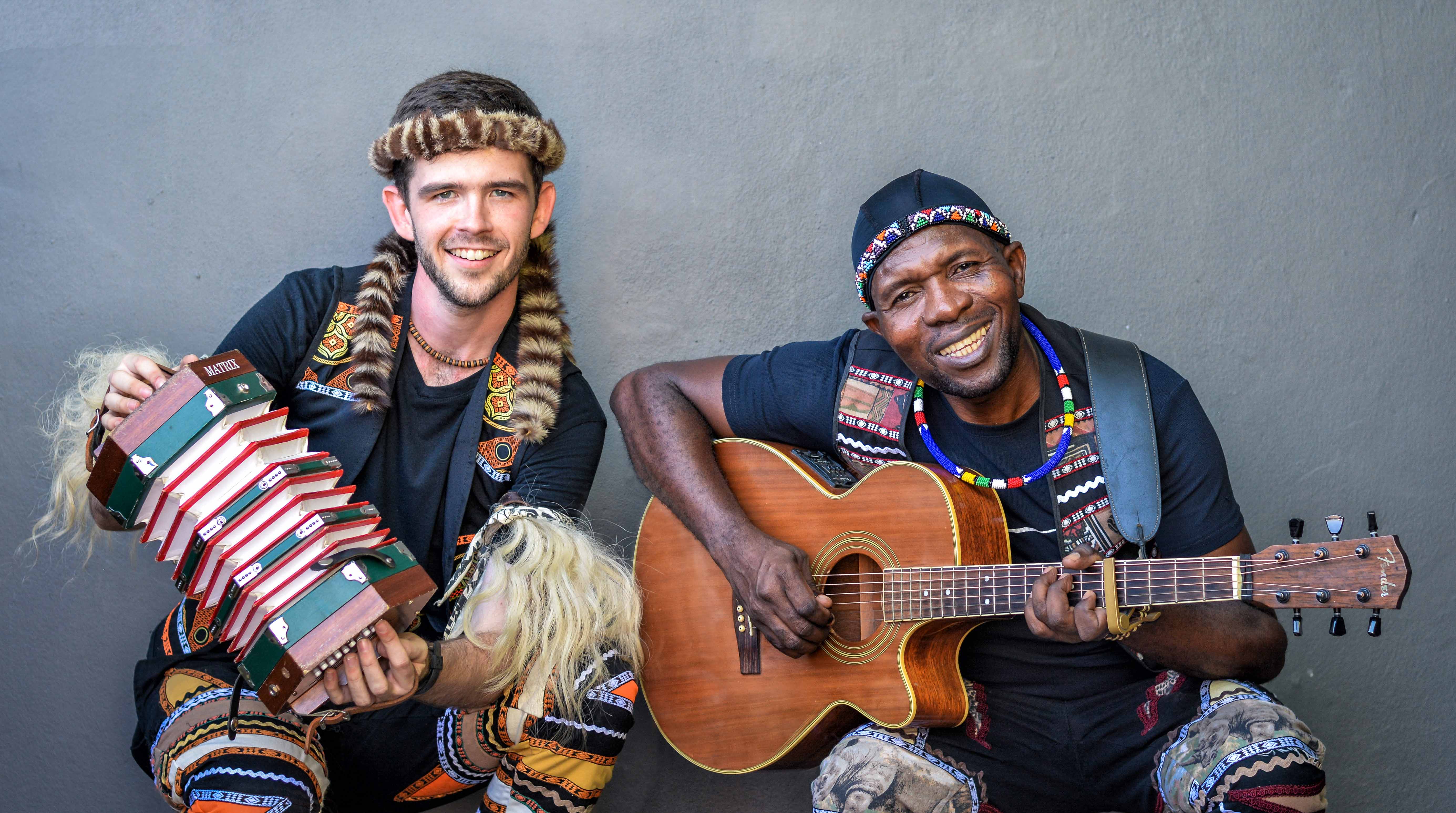 Hailing from Empangeni in the heart of Zululand, Qadasi and Maqhinga are an acoustic duo on a quest to
revive the powerful sounds of traditional Maskandi music. Both professional musicians in their own right
and sharing the same vision, joining forces has resulted in an international caliber of music which
represents the heart and soul of South African roots music.

David Jenkins, also known as Qadasi, is an accomplished Maskandi guitarist, concertina and banjo player
who developed a deep passion for Zulu culture and music at a young age.

This interest grew exponentially over the years, and as a result, his love for traditional music was born.
After matriculating in 2010, Qadasi released his first studio album under record label, Sande Entertainment
headed by Sibongiseni Shabalala of four-time Grammy Award winning group, Ladysmith Black Mambazo.
His second album, released in 2014, has since been nominated for a SAMA (South African Music Award)
and SATMA (South African Traditional Music Award). In 2015, Qadasi was honoured to receive a KwaZulu
Natal Young Achievers Award for ‘social cohesion through Maskandi’.

Maqhinga Radebe began his career as a Maskandi musician in the mid 80’s and has received numerous
awards for his amazing musical skills, which also include SAMA and SATMA Award nominations.
Well travelled, he has performed to audiences in several countries, including Zimbabwe, England and the
USA and throughout Southern Africa, sharing stages with top artists such as Hugh Masekela, Ladysmith
Black Mambazo, Phuzekhemisi and Soul Brothers, to name a few.
He is presently most well known for his key role as the guitarist in popular Maskandi group, Shabalala
Rhythm.

David first met Maqhinga in Durban in early 2010 when enquiring about a concertina tuner. After a ‘jam
session’, thus began their story and the two have become firm friends, with Maqhinga taking the role of
music director and producer of David’s first solo projects.
The talented musicians later decided to join forces after realizing the musical potential that was possible by
combining their artistry.

Over the past several years, the two of them have travelled home and abroad with their eclectic fusion,
taking it to audiences in the UK, Europe, Asia, and throughout South Africa, and are thrilled to have
released their long awaited collaborative album titled, “Lashis’ Ilanga” – an organic, acoustic fusion of
traditional Maskandi and western folk music. This was recently nominated for a 2017 SAMA Award for
Best Traditional Album and a SATMA Award for Best Male Group.

Aside from promoting Zulu culture, traditional music and social cohesion, the duo have also been actively
involved in rhino conservation, working alongside the Kingsley Holgate foundation and Project Rhino
as rhino ambassadors.

There is much excitement in the promise of what lies ahead for this Maskandi duo which is continuing in
the footsteps of this powerful genre’s icons.