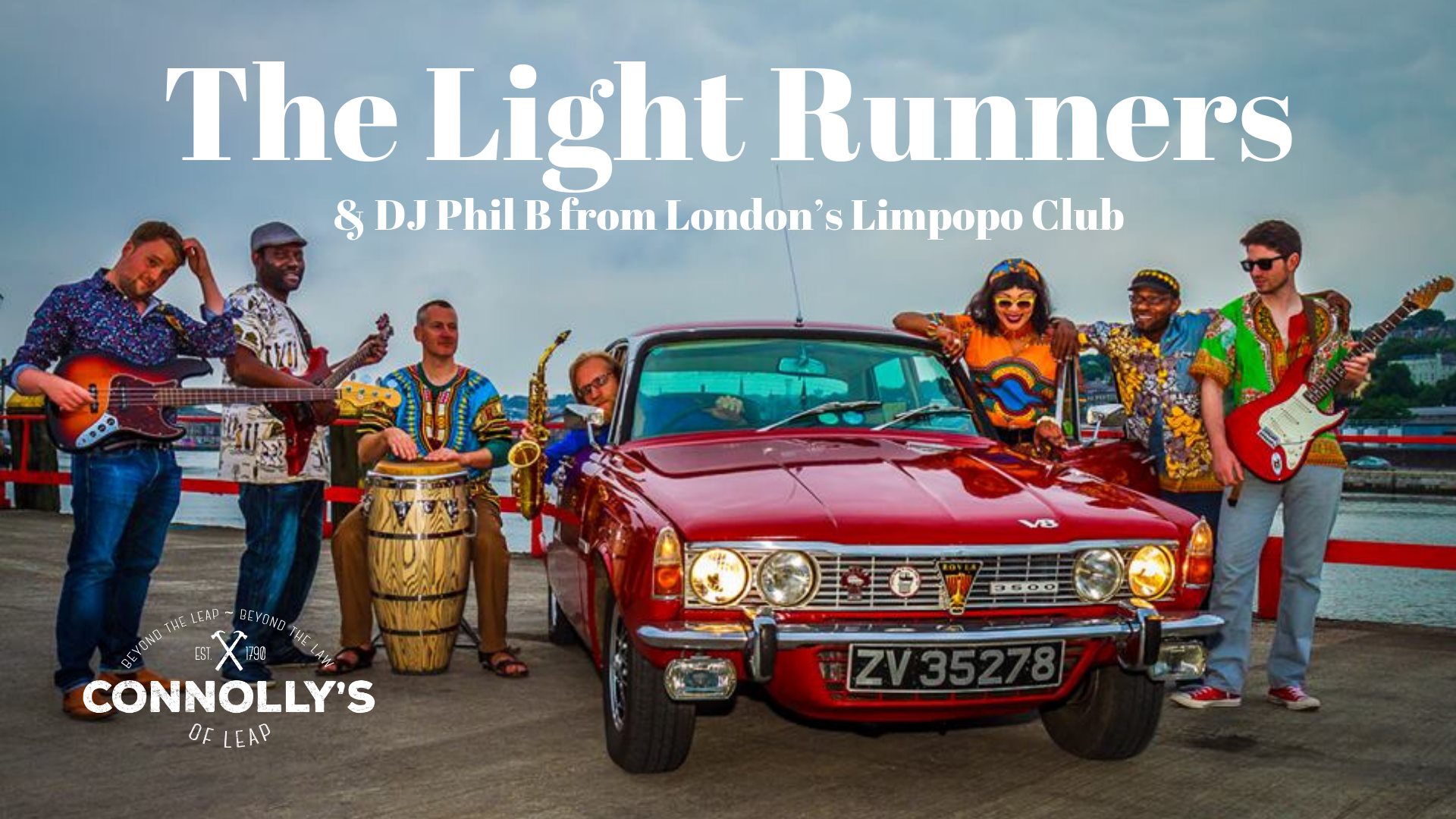 A night of African & Caribbean Music

The Light Runners were formed in 2014 by Lazare Mbouwoua, from the Central African Republic, the lead singer and frontman of the group whose passionate and enigmatic performances have brought people of all ages to the dance floor all over Europe & Africa. The lead singer with a number of Reggae bands for over 15 years in the Congo and Germany Lazare is the band leader and driving force on stage.
Lead guitarist best known for his work with legendary Congolese Rumba bands OK Jazz and Zaiko Langa Langa as well as ‘Ireland’s most travelled African band’ The Lace, Daniel Muyombo is a true power house of the electric guitar, his African style guitar solos breathing new life into many reggae
classics. Affectionately referred to as “6000 volts” by his bandmates, Daniel has been electrifying audiences across Ireland and Europe with his improvisational flair. Daniel is joined on stage by his long-term friend and collaborator Oscar Fololo ‘Troca’ , also from Kinshasa, the capital of the D. R. Congo. Always ‘the man at the back’ Troca has played the drum kit
behind Daniel for decades, performing at shows in countries across the world with many internationally recognised bands, including Zaiko Langa Langa and TPOK Jazz in the Congo as well as The Lace, Motema and Pitak in Ireland. His knowledge and experience makes him undoubtedly one of the top African kit drummers working in Ireland today. Percussionist, Patrick Naughton has played alongside Daniel and Troca in a number of bands including Guadeloupian Gwoka band Pitak. Patrick has worked as a drum workshop facilitator for over 12 years and has a number of drumming groups set-up across Munster who regularly meet to practice and perform.

Saxophonist Ollie Elschotz is a music graduate from Northern Ireland and much in-demand as a live and session saxophonist. Ollie has worked with many bands including The Cosmic Funk Band and Quangodelic with whom he is still an active member
Rhythm guitarist Mark Fenny is a Music Graduate of UCC and works as a private music teacher and facilitator. Mark has played at many venues all over the country with a variety of acts including a number of appearances at Electric picnic and performing on the Late Late Show with Paddy Dennehy and the Red Herring in March 2016. Dave “the Groove Machine” Scanlon is a man with a background in funk and jazz and was a band member with Cork-Based Cosmic Funk Band and Quangodelic among many others. Dave Scanlon has
been a part of countless jazz performances with many of Cork City’s top jazz artists frequently
performing at the Guinness Cork Jazz Festival. Dave is a melodic and captivating bass player who
brings the smooth fretless groove of Jaco Pistorius and tight funk to reggae.
The line-up is completed with backing vocalist/dancer Benita Nsudila, also from the DR Congo and
backing vocalist with Congolese Soukous band The Lace.