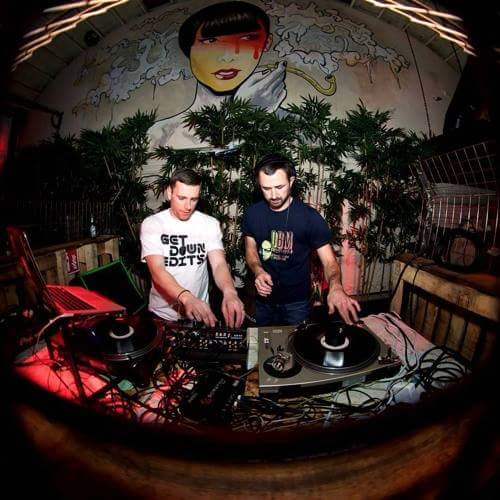 Get Down Edits are Darren “Daz” Dalton & Martin Roche,

If you count up the years that Daz and Martin have been playing individually and together then youve got nearly half a century of Dj experience. Added to that the success of their own partnership and label with the release of Get Down Edits Vols 1-4 and youve got a seriously solid pair of DJ`S and edit masters.

Still living in their home city of Waterford in Southern Ireland, the duo have recently been playing host to some of their favourite Djs and producers at their new Monthly residency in The Terrace @ Shortts Bar Waterford. Dick Trisco and LTJ Experience have played with Get Down Edits in Irelands oldest city so far in 2013 with some very special guests lined up for the summer months including Charles Webster & The Revenge.

Starting off from a House & Deep House background in mid 90s to early 00s, the boys shared the decks early on in their mixing career with many national and international acts like
Kenny Dope (M.A.W), Dj Deep (Paris), Dj Harri (subclub), Yousef, Ben Watt, Fish Go Deep, Charles Webster, Frank Roger & Atjazz. A residency in Waterford club Shakedown
in 2006 allowed them to explore their style and flair for mixing music; they kept their house music mixing style while playing 80s funk, soul, disco and classic electronic music. Their own Get Down residency started in 2008 and allowed
the duo to further refine their signature sound to the deep and soulful disco sound it is today. Get Down nights also first introduced many International Producers and djs – Craig

Smith, The Revenge, Greg Wilson and Chez Damien to Waterford ears and dance floors. Daz and Martin continue to stay very close to fresh new sounds and talents in their efforts
to share the best sounds and parties in their home city. From the early days Daz and Martin made their own Dj sets that bit more exclusive with the inclusion of their own remixes and edits. And then sharing these edits with Djs they
respected got them some great feedback. When an email came in from Greg Wilson saying he was getting a great response to their edits, their own label was finally born. The first vinyl press of Get Down Edits Vol 1 (released in June 2011) sold out within weeks & the digital release remained in juno downloads top ten selling releases for two months. Vol 2 was released in November of the same year &amp; included tracks from Deep and Disco & 78 Edits alongside two of their ownGet Down Edits edits. Vol 3 got its release July 2012 and included tracks from Late night tuff Guy and Rayko,
2013s recent Vol 4 went straight to the top of the charts on juno with the vinyl being re-pressed with weeks of its release. In May 2013 the digital release went very quickly to the top of junos download charts.

Get Down Edits tracks are very much out on dance floors nationally and internationally as supported, played and loved by Greg Wilson, Cosmic Boogie, Dicky Trisco, The Revenge, Kev Beadle, Doc Martin, Pete Herbert, Jacques Renault, Deadly Sins, Ltj Xperience, House Of Disco Records & Rudy’s Midnight Machine just to name a few.The lads have released music on other great labels of the disco world such as Disco Deviance,Editors kutz,File under disco,Midnight riot,Masterworks music,Paper disco,Hot digits,Wall of fame,Queen and Disco.

Daz and Martin have also received praise from the New York Legend Kerri Chandler when he added their names to the thanks list of both his NRK Coast 2 Coast &amp; Southport weekender mix cd`s as he was so impressed with their many many warm up sets for him.

Daz and Martin have progressed from playing local club nights around Waterford, to hitting the decks every weekend at parties in Cork, Galway, Dublin and Belfast as well as many festivals nationally (Indiependance, Body & Soul, Gateways,Electric Picnic, Sea Sessions) and festivals overseas such as a Electric Elephant Festival in Croatia,Glastonbury,Liverpool Disco Festival and Brighton Pride festival. Their mixing & production talents have taken the duo to DJ in places as far as London,Liverpool,Leeds,Dundee,Newcastle,
Hamburg,Paris,Tel Aviv, Budapest,Brussells,Greece,Italy,and
a tour of Mexico in 2015