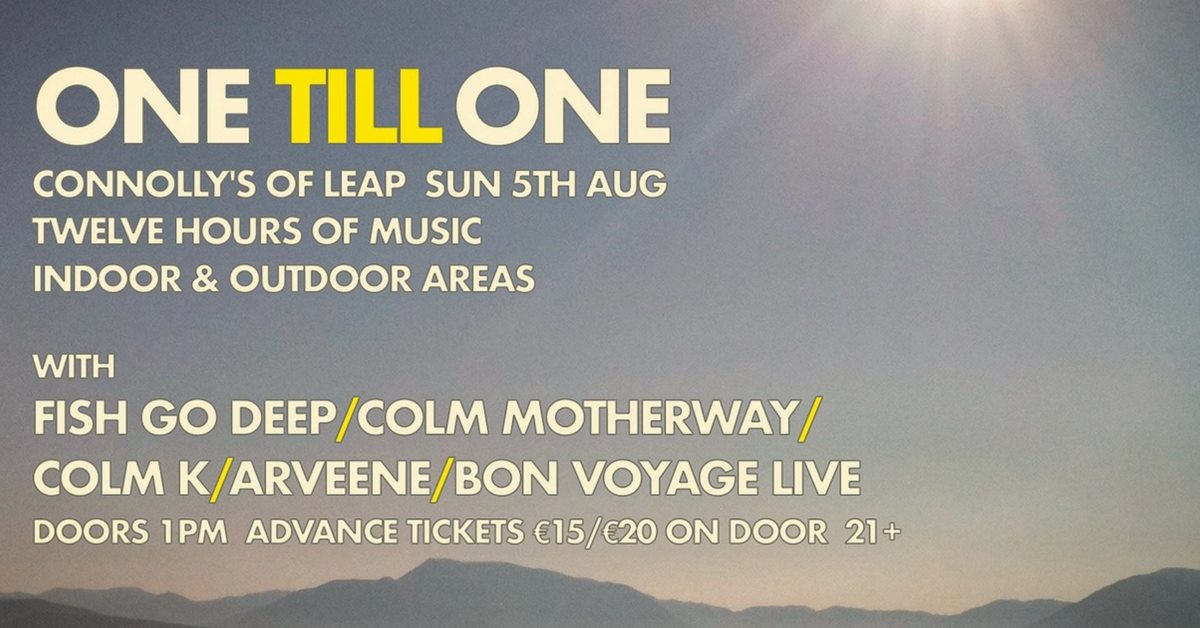 Connolly’s of Leap presents… One Till One

1PM – 1AM 12HRS of Music from some of our favourite DJs

Fish Go Deep are Irish house dons Greg Dowling and Shane Johnson. Their friend and fellow DJ Colm Motherway will be joining them under the hammers.

As Fish Go Deep, their productions have been released on Defected, Innervisions, Brique Rouge and Gourmet as well as their own imprints Ork and Go Deep. In 2006 they had their biggest record to date, ‘The Cure and the Cause’, a collaboration with vocalist/lyricist Tracey K which was licenced to UK house stable Defected.
_________________________________
Colm K :

Colm K is one of the most respected DJs in Ireland. Humble beginnings at the infamous Sir Henry’s saw him grow as DJ in his hometown of Cork, Ireland and lead to numerous residencies at reputable bars and clubs around Ireland including: The Pavillion, The Savoy (Cork), Ri Ra (Dublin), Trinity Rooms, GPO, Bar Cuba & many more besides.

Colm K draws from a wealth of knowledge in soulful sounds, which sees perform at many reputable clubs and festivals around Ireland and abroad. He has played and supported many of the globes most respected names including Run Dmc, De La Soul, Jazzy Jeff, Afrika Bambaattaa, Kenny Dope, Mr. Scruff, and many more besides. Spinning records lead to a natural progression in the production realm and since being part of the Red Bull Music Academy in Rome, 2004, he’s been busy with international collaborations and producing studio projects for the likes of Hypnotic Brass Ensemble and release music via Brownswood/FYE amongst others
_______________________________________
Arveene:

“For me [DJing is] about reading what’s happening around you and playing music to the crowd you have in front of you. That’s part of what makes a DJ great, knowing when to bring it down or drop some rare soul gem at the right moment to blow a crowd away.”

Bon Voyage are an international Hip-House 3 piece from Brooklyn, London & Dublin respectively: Dropping bass lines and spilling rhymes, for your catwalk and dance floor excursions.
They channel Fast Eddie, Doug Lazy, Traxx Records, George Clinton & Mike Dunn as spirit guides, closely washed down with a penchant for Alejandro Jodorowsky and the general vibe of Andre Aggasi.
They are Spearheaded by the Furious 5 love child himself : Shamon Cassette a multitalented fashion & Music power house
Dj Supreme – The London based master of connections, traveling the globe slaying clubs and always in search of the perfect beat.